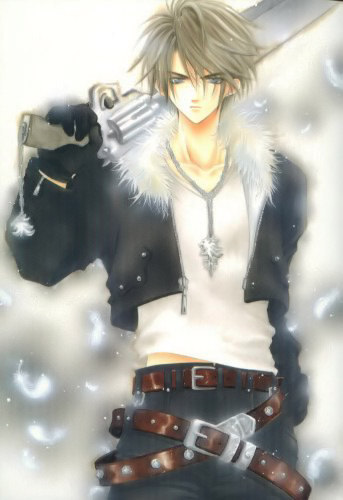 Clear-minded and unassuming. Victor holds a high moral code, being fiercely loyal to all allies, and always refusing to betray them even if the action were to be for his own benefit. He maintains a cheerful atttitude towards everyone, though in rare moments he lapses into a pensive silence that gives a completely opposite impression to the viewer who happens to see him at that moment. He has no desire for the Grail, but apparently wishes only for the safety of a certain individual...

Records say that Victor graduated from his university at a stunning 20 years of age. Several months later, he left England and traveled to Japan for reasons unknown. On his arrival, Victor immediately applied for a teaching position at Tomiya High - and was unanimously voted in by a fervently enthusiastic staff.

To their great disappointment, he refused to teach any classes other than marksmanship and archery, having personally funded the school equipment out of his own pocket. Victor has no trouble at all with the local language and even altered his own accent to match the Honshuu dialect associated with the region around Tomiya city. An unexpected result of all these factors was his becoming the high school heartthrob, but Victor has completely ignored the effects of this development.

Currently he is the school's single marskmanship instructor. All members of the sharpshooter's club have yet to defeat him, as it appears that he is even more of a prodigy with firearms than he was with his early display of intelligence...