From Popful Mail, a game that never fails to remind me of Slayers. I just can't seem to put my finger on why...

The English voices in this game are as terrible as any other western dubs, but with lines like that... I'm not sure it matters.

Necroposts from Breath of Fire.

Deis is unimpressed by Zog's unique breath attack and has seen fit to throw it right back at him.

Here's another one, just for lulz.

The Goddess just doesn't understand how anyone could kick her ass so soundly without resorting to cheesy ultimate transformations.

And then later on, a hilariously-phrased... 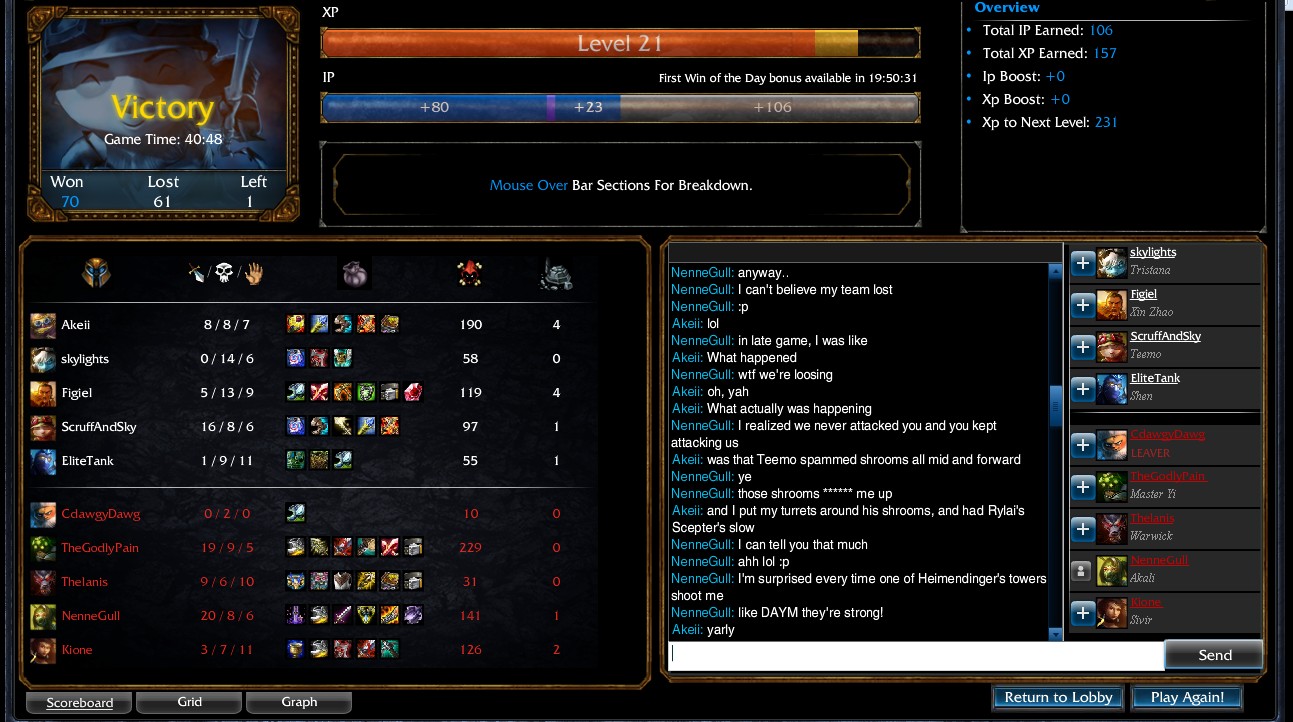 My team was seriously, utterly doomed in the first 30 minutes of the game with 3 doofuses that kept running ahead and getting killed. I was Heimerdinger and our best player was Teemo.

So what we did was this: after pushing to the last turret in the middle lane at the appalling cost of losing 10-15 kills of aforementioned allies, Teemo and I each bought a Rylai's Crystal Scepter, which slows every hit enemy by 35% for a 2-second duration per magical attack. Then we both rushed ahead towards the enemy base.

We soon realized that it would be a 2v4 battle against stronger enemies.

Teemo spammed mushrooms like mad RIGHT IN FRONT of the last enemy tower. I planted my fragile turrets in the middle of the mushrooms, which killed enough defending enemy creeps for the mushrooms to stay active. All our opponents were getting cocky around this time, so before buying their items they all ran out between my turrets, but they couldn't see Teemo's stealthed Mushrooms. Using my ulti I enchanted the turrets to slow them down.

The results of their decision:
#1 Slow: Teemo's poison counts as magic damage, so his poison slowed them down consistently by 35%.
#2 Slow: My turrets and spells all were magical, so the enemies were slowed additionally by 35%.
#3 Slow: Teemo's mushrooms again slowed them down additionally when they ran to my turrets.
#4 Slow: My ultimate gave all 3 of my turrets a similar effect to Ashe's Frost Arrows, again slowing them additionally.
#5 Blind: I used my concussion grenade skill to explode right in the middle of the team. It's an extremely slow and easy to dodge skill, but in this case, it hit and blinded every single opposing team member.

Final result: None of them could move a muscle, or even hurt us as we pounded away.

ALL 4 opponents died. And although they had an overwhelming level advantage, they could only sit and watch during their respawn delay as we plowed ahead and destroyed all their inhibitors. You really have to see the overview image to see how the tables were turned.