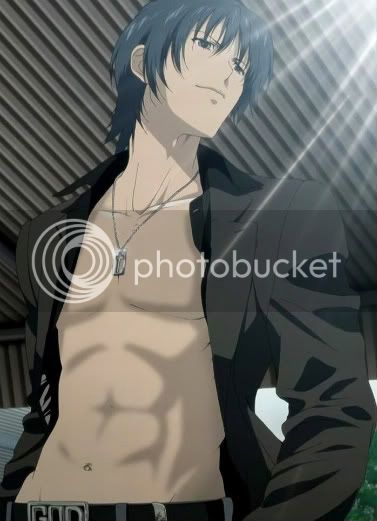 Appearance: A rather tall but well built handsome young man with well defined muscles, but not "buff" exactly. Curiously enough his attire looks modern and he could probably pass as a normal person if seen on the street. However his combat appearance is quite different, sporting light armour and wielding a long spear

Personality: Good natured and light hearted most of the time, and can come off as a bit of a lecher, however, when the time calls for it, he can become overly serious and all the joking and laid back attitude vanishes in the blink of an eye.

*Magic Resistance C: Nullifies all magic that requires less then two verses. Cannot block large scale magic such as great magic or ritual magic.
*Eye of the Mind (True) D+: Capable of calm analysis of battle conditions even when in danger and deduce an appropriate course of action after considering most of the possibilities to escape from a predicament. So long there is a small chance of comeback, this ability greatly improves the chances of winning.

*Charm D: The ability to convince one person to follow a command, for thirty minutes, with a 50% chance of getting them to do something against their nature.
*Eternal Arms Mastership (Edged) A: Mastership of combat arts has reached the point of being said to be unrivaled in one's era. By complete merging of mind, body and technique, it is possible to make use of full fighting skills even when under the influence of any sort of mental hindrance. Moreover, this ability also allows him to use any stabbing or slicing weapon from any age. Even mundane objects, as long as they are sharp or pointy, can become dangerous in his hands.
*Protection from Arrows B: Increased defense against ranged attacks by predicting the projectile trajectory through exceptional means such as hearing the sound of air being cut or sensing the killing intent of the enemy.
*Bravery A: Capacity to resist mental interference such as pressure, confusion and fascination. Bonus effect of marginally increasing melee damage.
*Battle Continuation A: Will remain alive as long as does he not receive a fatal injury.
*One Against Many A: Due to being adept at fighting in a war like setting, dealing with multiple foes at once isn't a big deal.
Noble Phantasm(s):

Weapon/armour: Wields an over sized spear that one would think would be extreamly difficult to lift, let alone use in any sort of combat, but he wields it effortlessly. He also has a sword, but it is merely a secondary weapon which sees very little use. When he goes into combat, he becomes armoured.