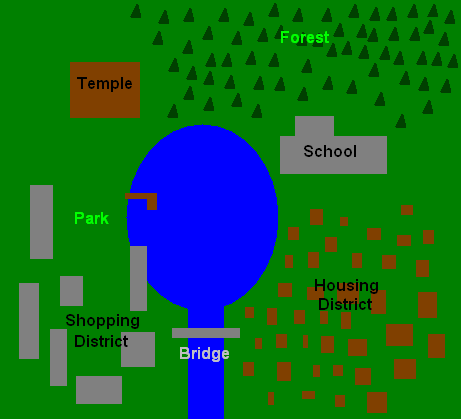 The fictional city in which Fate/corrupted equanimity takes place. It's designed to 'keep the feel' of Fate/stay without being exactly the same. Feel free to remake the map in a better program if you wish, I just wanted to get something up for visual reference.

This setting is designed to take place about five years after the events depicted in the anime but, since a year was never stated in Fate/stay, we'll avoid stating one in the roleplay. The city will share the current month and season we're currently experiencing, so time will pass on a day-by-day basis. Due to time zone discrepancies, however, we won't specify a date. So no year or day, just month. Anyway, on to the actual city description.

The city of Tomiya is built around a lake, which I'm realizing at this point I forgot to name. The housing district to the southeast contains all manner of.. Houses, but most of the larger ones are located on the southeastern side. There's a bridge over the southbound river (which will probably share the name of the lake) that allows direct access from the housing district to the shopping district, which contains all manner of buildings (i.e., we'll fill in what all it has via our creativity in roleplaying) and is in some cases also referred to as the business district. To the west of the lake is a large park with a small fishing dock, and the temple resides a good walk's north of the park. To the north and northeastern areas of the lake, there is a large, sprawling forest. And east of the lake, also easily accessible from the housing district, is the city's high school.

It's said that the layout of the city was initially a bit different and the school was part of the business district back then. But for one vague reason or another, people slowly left the buildings in that area until the forest had taken it back, leaving the school as the only active and maintained building in the area. The few scattered ruins of buildings amongst the trees seem to correspond to this theory, although it's difficult to tell exactly how far any of the ruins are into the forest. Most unconsciously avoid the area due to the number of people that have supposedly gone missing there.

I'll open this up for comments and suggestions here. I consider the city a work-in-progress, so we can add onto it as we need. But it's complete enough to be used, I think. Most of the locations aren't named and a lot of them could really use a name (the park, the temple, the school, etc), so if you come up with a nice one, be sure to post it! If you can't tell, I'm terrible at coming up with them.

There's a really huge map outline of F/SN's Fuyuki City with all the location details at this link. You could just rename the map and locations with paint if you wanted to be original, but the map itself looks awesome.

Check out the picture:

Ah, looks like the map from the Fate/hollow novel. I was wondering if anyone had pieced it together. Thanks for that link. I probably won't use the map for Tomiya City, but it's extremely helpful as a reference since I wanted to keep the Fuyuki feel and all.
_________________