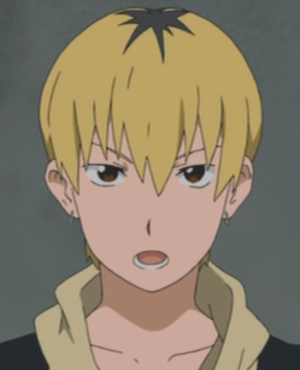 Junichi, or just 'Jun', is a first year at Tomiya High. He sports slightly long, stylishly head-hugging hair that has been bleached blonde to stand out. One can see the black of his natural hair near the roots where it's grown. Both of his ears are pierced and adorned with simple silver loops. His typical casual wear consists of a navy and tan hoodie, standard dark blue jeans and a pair of tan tennis shoes.

Perhaps due to his yakuza cousins, Jun is a bit of a showoff; primarily with his knowledge. He likes to be the center of attention and is something of a skirt-chaser. He tends to have passionate episodes about manga and anime (and other related products), most of which end abruptly when he is quickly distracted by another series. Jun has decent artistic skills of his own and has tried to write and draw his own manga several times, but they've never gotten far before he lost interest. People tend to like him regardless of his actions for his sense of humor and energetic behavior.
_________________