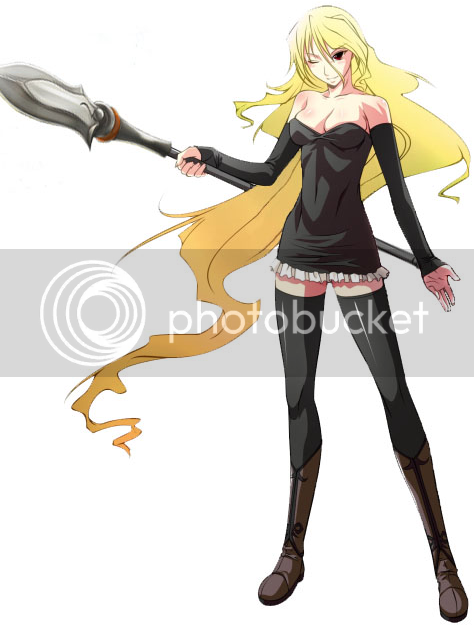 Appearance: A rather tall woman with long blonde hair and a rather athletic physique. One might describe her as a blonde bombshell with odd redish-purple eyes and very fair skin. Her dark clothes a sharp contrast with her pale skin. She has a distinctly scandanavian look about her.

Personality: A rowdy energetic woman that seems to enjoy her alcohol a bit much. It can be very hard to take her seriously, especially if she is squishing someone into her boobs with a big bearhug. It takes a bit of coaxing to get her to behave seriously, but it is possible.

*Magic Resistance B: Nullifies all magic that requires less then three verses. Difficult to hurt her even using great magic or ritual magic.
*Riding A+: Ability to ride things. Can even ride demonic or holy creatures if they are beasts. This does not however include dragons.

*Mana Burst C:Increase of performance by impregnating one's weapons and body with magical energy and instantly expelling it. Simply put, recreating the effect of jet burst by expending large amounts of prana. (Normal weapons can be destroyed in one or two blows)
*Protection from Arrows B: Increased defense against ranged attacks by predicting the projectile trajectory through exceptional means such as hearing the sound of air being cut or sensing the killing intent of the enemy.
*Bravery b: Capacity to resist mental interference such as pressure, confusion and fascination. Bonus effect of marginally increasing melee damage.
*Heart of Harmony C: Prevents decrease in the effectiveness of a technique, regardless how many times it is used against the same opponent.

Weapon/armour: She wields a short spear in one hand, and a small shield in the other. Her armour consists of a gown of sorts which shows considerable leg, with metal armour protecting the chest, shoulders, forearms and shins. She also wears a winged helm.