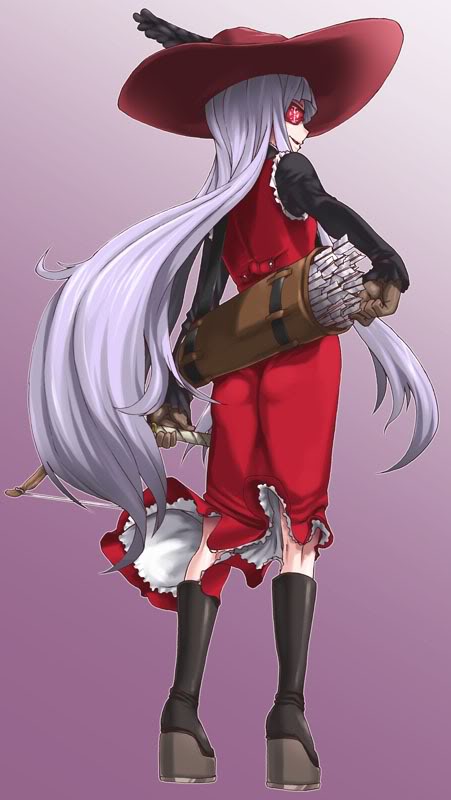 Personality: Cynical and immodest, Archer is the kind of person who does things because they're immoral or taboo; just because she's told not to. In fact, she often makes it a point to persuade others to do the same. She has a voracious appetite and often makes remarks about how things taste, from actual food to certain kinds of people and other things that generally aren't meant to be eaten. One of her purer joys seems to be clothing; she loves trying on different dresses and costumes, often adopting a new outfit for every role she decides to play.

Archer's persuasion methods vary greatly from person-to-person, but almost all of them involve acting. She can be kind and friendly, prim and ladylike, stubborn and easily embarrassed, a drunk, a student, a maid, a parent, a prostitute, even docile and innocent, whatever best suits the 'project' at hand. That's not to say she's a perfect actor, but she does seem to have a lot of experience with it. She is completely indifferent to gender in her sometimes-sexual corrupting habits, and age is little more to her than a measurement of experience. Her favorite 'projects' are pure, innocent beings due to the enjoyment she can get out of slowly, thoroughly corrupting them (assuming she doesn't just eat them before she gets the chance, which she admits to being fully capable of doing). That slow process provides much more satisfaction than quickly doing the same to an easily-tainted human. Conquering the ultimate purity could be considered one of her goals, though it's definitely not her wish for the grail given that a world without things to pervert would be extremely boring. A fully- or mostly-corrupted soul is of little entertainment to her and is typically left to bring itself to ruin while she searches for something more fun.

Class Abilities:Personal Skills/Abilities:Noble Phantasms:Weapon/Armor: At range, she weilds a simple, dainty-looking shortbow that is deceptively powerful for it's size. The bow was meant for short range combat, but it can be used effectively enough at medium range as well. If she is above her target (i.e. on a towering building), however, the effective range is quite magnified. Otherwise she fights bare handed, with her own nails and teeth, simply because the raw, primal act of killing with one's own body appeals to her. In the event that she becomes more serious, she directly stabs or slashes with arrows from her quiver.
_________________