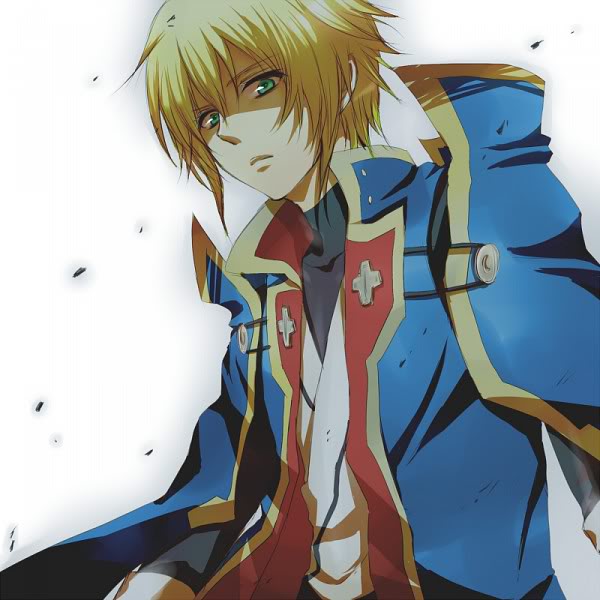 Appearance: He has rather short, blonde hair, maybe a bit disheveled but not to the extent of naming it rough. His green eyes are glowing with energy and are clear enough to look in them and use them as a mirror. He is quite tall, has some muscle development but he’s totally not a bodybuilder. He is giving off a positive vibes and kind feeling, just like an older, more experienced brother. He wears quite a lot of clothes. Exactly on his body he wears black, tight, longsleeved t-shirt, then on it he wears a white, elegant, sleeveless camisole which is tied with a black belt on his waist. He also is often seen while wearing a blue jacket with long, wide sleeves with kind of kimono-feel attached to them. He also wears black pants and elegant white boots. Although that may seems a little extravagant his clothes are actually really thin and his body receives a lot of wind and air. While he enters the battle his jacket shrinks a little, loses his long sleeves in its place they appear a long white gloves.

Personality: He is really kind and might be described as likeable at the same time rather polite, although he knows when he should express his feelings, not exactly polite ones, clearly to his speaker. He cares a lot about his pals, but he tends to lecture his friends if they do or think about something bad (no matter ethically, strategically or just if it’s something he can’t agree with), he knows borders and he is trying to not exceed them though. He often do things in a roundabout way because he believe that sometimes it’s better to actually show people what will happen if they would do something wrong, than just explaining them the same in words. A picture or witnessing something is worth more than a thousand of words for him. He isn’t a quiet type though, and he has a variety of topics to talk about. He seems like someone experienced in a wide spectrum of things, but he actually isn’t an omniscient. He often makes mistake while doing things which he isn’t used to or talking about things he don’t know a lot about, but they’re aren’t a result of him being a knows-all but actually him trying to do something decent while having available for him knowledge and means. He also loves learning new cultures, he always tries to pass for an citizen of a country in which he is and get to know a lot about a place in which he’s staying. He asks a lot of questions, tries to be detailed, but everything in moderate. He loves art.

Strength: A
Endurance: B
Agility: B+
Magical Energy: B-
Luck: B-
Noble Phantasm: ???

Weapon/Armor: He is using sword at the moment, which name is currently unknown and it’s waiting for its user to call its name. It is a long burnished steel blade, with a golden tilt and some kind of probably expensive diamond embedded in it. He also use shield, in shape of a little bit curved triangle, a small one which isn’t disturbing Saber’s movements, attached to his arm. His armor is similar to his everyday outfit, it’s a little magically strengthened just like the shield but it shouldn’t be a challenge to other servants. It’s quite opposed when we’re talking about humans though. Saber also carries a horn (instrument) by his belt.

History: Will appear upon discovering his identity.