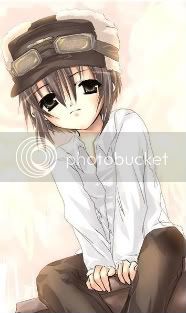 Kaito is a First year highschool student with almost shoulder length brown hair and empty black eyes. Since he was born, his eyes have been deteriorating slowly, and he will, with time, lose his ability to see. His favorite type of magic is wind though he has shown a slight affinity to fire as well.

Kaito's family is rather wealthy and has a fair amount of pull in tomiya city's upper class. They are the owners and founders of the Izumi hotel franchise. However, since long ago Kaito's father has denied that Kaito was his son, resulting in him being unable to live in the family home, as such he lives in one of the lesser populated hotels in the city. His mother and father are both noted to be rather skilled magi.

Kaito's grades are top notch, as he made it his goal to read and learn everything he could before his eyes made it impossible to do so. Teachers know him to be very studious and out going.

Kaito's main issue is with bullies, having a defect combined with his small stature has made him a target his whole life. He refuses to fight anyone with anything besides magic, calling it "barbaric and wrong" so, to survive, he developed a rather impressive ability to side step people often escaping before the fight even begins. If escape is impossible, he will do his best to dodge until the aggressor is too tired to continue.

The only club Kaito joined at school was the track team to keep himself in shape, all other forms of labor he considers "barbaric" and refuses to participate. People who don't know him may believe he is snobby due to his attitude towards work, but in actuality he is a pretty calm and down to earth kid.
Magic Circuits: 38
Mana Capacity: 210
Mana Regen:10
Circuit Efficiency: 1:1
Magic Trigger: ???

Traits:His body is very sensitive to mana allowing him to sense augmented items, spells, artifacts or runes from a considerable distance.

Family Crest:On his forehead, arching around his eyes and ending at his cheeks.

Command spells: Still possesses all three. On his chest just over his heart.