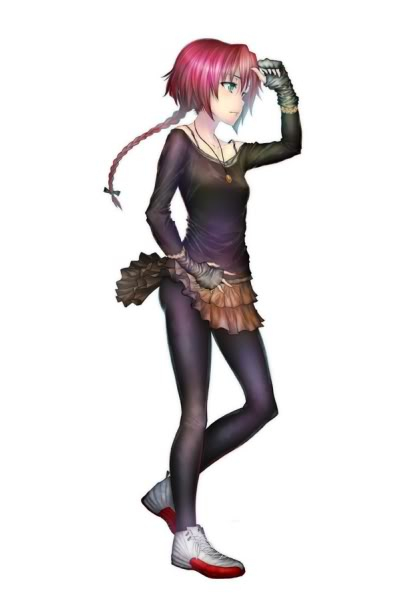 Traits: Although she has 30 magic circuits, 5 of these are always being used by her. She is using them unconsciously but she know about whole process and she can’t stop it even if she would like to, it’s just like breathing for her. These 5 circuits are used for managing her state of mind. She needs one functioning to operate normally in life, other four can generate different emotion within her as need is. If she needs to focus she can easily do so by ordering her circuits to create emotion of calmness. One could say she just can easily adjust to situation or that she has strong will but it’s an effect of this 5 guys in her.

Elemental Affinity: Ice (a little bit of water too, through connection with ice)
Shimizu was always a child of winter. She preferred snow’s coldness than violent rays of sun which in her opinion could’ve bring many bad things from the darkness of this world. She never catched a cold, she never had felt chill and as long as she can remember snow has always been “kind” and “warm”. While other people may find that opinion questionable for her it’s the truth - she just doesn’t seem to be affected by ice in every form. Whether she spend a lot of time at cold night outside or she just right now throw herself to icy lake in winter time just to swim for a little, she just isn’t affected by it and she seems to enjoy the feeling which almost everyone hates. She isn’t suffering from it even for a little.

Family Crest: Surrounding her neck, it resembles a single chain with a rose-like element right under her chin.

Command Spell: Three, above her right breast and under the collarbone. They look like three blue roses (on a plane of triangle) tangled by blue thread. She either use some powder/magic to hide them or just says that this is her favourite washable tattoo.

Appearance: Medium length red hair, slightly different in different points of length, from almost dark red on top becoming more pale (but not entirely) on tips, meaning she has large scale of red color on her head, part of her hair is done in a simple, narrow but long braid. She can’t be insulted by names like “tower-san” and other because she isn’t especially tall and her height might be considered as average height in her age. She is rather slim, has long, pretty limbs and delicate hands. Her green-and-sea-like-color eyes seem to glow in darkness but it might be only hallucination, depth of her gaze can’t be questionable, especially when she isn’t looking at anything in particular but seems to be just gazing and has her eyes fixed on something which can’t possibly be visible. She has also rather playful kind of smile. Ah, mother nature hasn’t been generous for her in the area of her chest - it definitely can’t be her proud but as long as someone don’t mention it in small talk she won’t mind (which spells just try to say it, c’mon!) besides her breast aren’t that small, you know?!

She is wearing similar clothes almost everyday which consist of dark-orange miniskirt, black long-sleeved blouse, leather fingerless gloves, sport shoes, black underwear and pantyhose. She doesn’t wear much accessories. She only have orange pendant on her neck and a little ribbon on her braid. She carries a gun with herself all the time, though she hide it well and nobody has never noticed it.

Shimizu is studying in Tomiya High, currently in a second year, and is living in Tomiya City with her foster family (their family name is Yurugi [動]). She is loved by them and this feeling is returned. She loves dishes made by her mother and she spent some time everyday to talk if only for a little with her father. She also spends a lot of time with her younger sister for whom she care deeply. They are often seen while taking strolls in the city park which both of them love. She is a family girl and she can’t imagine her life without her relatives. Needless to say it’s a magi family, maybe a little unusal one in modern times, because these magi tries to put family before magic itself. She herself comes from another magi family, more strict and famous, but she severed ties with them few years ago and any form of communication between them has long since disappeared. She is just living her life alone with her “real” family, but she weren’t able to shake off one last remnant of her previous life - her real last name. Suisakas forbid her to do so, even while knowing that they won’t possibly ever meet again. Not that they nor she want to do that.

Her personality is a little chaotic one. From one side she is very serious towards magic, from the other she is just a bored brat who wants to get as much fun as possible in human society. She is a good person though, she’d lend her hand if she would know that she can help someone she knows, but she isn’t so good to help everybody she has in her sight and she definitely isn’t the one to tend to help everybody even if that would cost her a lot. She has some friends in Magi’s Association, she had also some friends in school, to whom she stick and go out with because she is really sociable and prefer to be with people than alone. She seems to be a perfect buddy to laugh with and typical example of “stupid and playful friend from typical anime” and for some reason she isn’t an object of love affairs. She often jokes around and tries to avoid the irritating topics by all possible means (even with tricks like “look there’s a rampaging dinosaur behind you!”). She has confidence in what she decide to do but she tend to spend some time on thinking before really acting if the case is serious, but she always seems to be full of ideas to bring even more chaos into her schoollife. Some people might spot her sitting on park’s benches and gazing off, which looks like she would be in process of recharging her batteries for another day which means that even she need sometimes a little while to catch breath. Besides that she likes modern ways of entertaining herself so she often goes to karaoke or to shops to buy something for herself. And she seems to be very easily getting emotional. She cries on sad films, she gets angry while discussing something with somebody who has opposite point of view.

In school she is known for being playful, doing a lot of racket, rampaging on breaks between classes. She also seems to be treating school like her playground and the place to just relieve her stress and get as much fun as she can. She often is being misunderstand and people sometimes feel that she is just mocking them but she isn’t doing anything to hurt somebody. She is mainly with guys in her school who are trying to keep up with her being unpredictable but anyone hadn’t ever confessed to her in her whole life. Maybe they’re afraid of what would happen to oneself if he would suddenly become an object of an emotion surpassing a simple friendship, what will she do or what does she see being together as? Obviously she isn’t very pleased with this situation but in the same time she don’t have her eye on anybody. There are guys who looks like perfect match for her but in a strange way she often ends up joking and kidding them or doing some tricks on them and then she finds out that se weren’t really interested in them. Well, she just can’t be serious at school so she might search for her man somewhere else... On the field of actual studying she does so the point of always having average grades but she can’t say she really gives her all to this stuff of which she is constantly being reminded by her teachers. The only thing which she really consider important in school is theatre club which she joined right after enrolling in this school. She had done a lot of acting since that time, by playing in theatre club she has even get some sort of reputation outside the school so sometimes she is asked to perform on more serious ground - in real theatre. She do so from time to time but only when she is sure that it won’t collide with other things she has to do. If that’s what happens then she mercilessly turns down even the best offer, because even person like her has some priorities and would stick to them. It’s a bit of shame since she is really good at acting but it also present that she is really trying to follow at least rules set by herself. There are also some rumours about her having a gun and bringing it always with her, hidden under her skirt but nobody hadn't tried to check if it's true.

She almost changes herself when it comes to learning magic. She suddenly becomes a passionate and loyal student who will learn more and more if she got a chance. Her personal teacher is her dad, she is steadily learning new things from him and she is becoming a better magus step by step . She is also a member of Magi’s Association, like her biological and foster family. She study magic with utmost care and she always puts her all in research. Of course there are some differences in her way of handling learning of magecraft and the way her foster family does which is because of her different upbringing but it seems to not be a big problem. They never was very famous but they were quite recognizable in some spheres because of certain reason.