Appearance: Average height, fair skinned and lithe. Archer has a somewhat booky, if not librarian-esque appearance, only worsened by her permanent indifferent stare. Her eyes are almost always half-lidded, as though she pays no attention to her surroundings.
Her hair is a light, golden blonde and her eyes a striking cerulean. Her attire is a rather odd mixture between medieval and Victorian, raising the question of just what time-line she is from. While quite beautiful, she seems exceedingly introverted and almost emotionless.

Personality: While her outward appearance is off-putting, Archer isn't what she looks to be. If having a 'poker face' was an ability, she would be a master. She is actually a very loyal, perceptive girl. She seems emotionless often, but in actuality, it's a worry of getting close to others, relating to her past and true name, which she seems even more stand-offish to discuss.
Archer is very observant as well as wise, and tends to like books and intelligent situations, as opposed to sporting ones. She greatly enjoys simple things like baking and sewing. While she is neutral by nature, she is loyal; almost without question, doing what her master wishes rather than her own morals, thus rendering her alignment to whatever he master wishes her to be. She does, however, have a grim curiosity for things that should otherwise be left alone.

Projectile Mastery (Universal) B: Archer has a mastery of her weapons, and can attack with a freakishly precise accuracy. While she isn't the strongest, her accuracy is what makes up for it, as well as her speed in firing. She has little to no issues nullifying or dodging projectiles coming her way, though, this does give her a much larger disadvantage to close ranged opponents. Rarely will she use anything but rifles, but she does have the capacity to do so.

Magical Resistance A: The ability to resist all magical attacks below A.

Independent Action EX: While her base rank is actually B, due to the nature of her Mana Exchange Reactor, this ability is not often even noted.

Mana Exchange Reactor B: User acts as a personal mana generator, allowing them to be cut off from their own supply for an extended period of time, walk around masterless and even enhance their master's own magecraft. However, it also causes the user to use up twice the mana needed regularly to activate their own Noble Phantasms. Skill is passive. If disrupted, Independent Action of B rank takes it's place until the disruption is dealt with.

Battle Continuation C: Will remain alive as long as does she not receive a fatal injury.

Fearless A: Intimidation tactics fail with a near 100%. This is both a positive and negative, considering the nature of many opponents. However, this does leave her susceptible to other mental abilities like Charisma or charm.

Divinity X: Indiscernible if a holy divinity or a demonic divinity. For those who try to comprehend, her nature seems to be in an impasse between the two.

Weapon /Armor: While her class title is archer, Archer's weapon of choice is actually two large flintlock rifles; Mephitz & Tophel ( Destroyer and Liar),said to be a physical form taken by Mephistopheles, ornately designed. She often carries them on her back, in two holsters hidden beneath her cape. Her amour is that of the outfit she was summoned in, though the cloth itself seems to be of some strange construct material, acting as though a malleable armor. 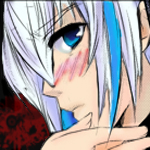