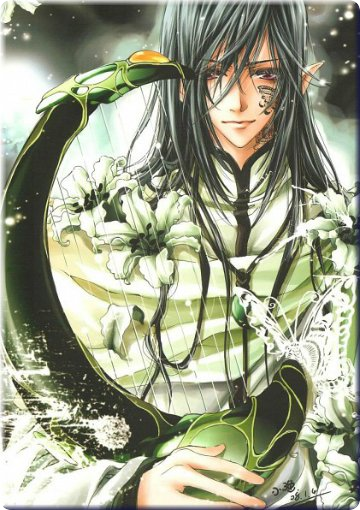 Appearance: Caster seems to emit a radiant glow around him, and his beautiful features, melodic voice and piercing eyes add much to his charisma. A bright mark in the shape of a circlet rests around his forehead.

Personality: A seeker and collector of lost music, Caster is always on the lookout for songs he's never heard before. Upon visiting a new area, he immediately gets the locals to sing him all the songs they know. Sometimes he can piece together a lost ballad from several partial versions remembered in different regions.

To Caster, nature is full of marvelous music, from birdsong of every variety to sounds such as the rustle of leaves, the howl of the wind, the rumble of distant thunder, and the pounding of the waves on the shore.

He is energetic and yet wisely temperate. Caster is also a masterful judge of character, which perhaps has resulted from his past vocations. There's no end to what he can dredge up, and few lengths to which he would not go to learn some new song or recover some lost epic.

Class Abilities:
Territory Creation A: The skill to build a special terrain that is advantageous to oneself as a magus. At this rank, creation of a "Temple" -type territory, which is superior to a "Workshop," becomes possible.

Personal Skills/Abilities:
Animal Dialogue A: Caster's lineage allows him to communicate using normal speech with all animals.
Bravery B: The ability to negate mental interference such as pressure, confusion and fascination.
Charisma A: Can be said to have achieved the greatest level of popularity as a human being. Also grants knowledge on how to motivate and inspire crowds.
Divinity B: The blood of a divine beast flows through Caster's veins. He is immune to curses of rank B and below, and can innately detect nearby beings of evil alignment.
High-Speed Divine Words B: Caster can craft Thaumaturgy-level Magecraft at the speed of Single-Action spells. Casting time for higher levels of magecraft is reduced.
Voyager of the Storm A+: The talent to impel a ship and those the user identifies with. Because the ability as a group leader is also necessary, this unique skill also gives the effects of both Charisma and Military Tactics.

The above artifacts can be summoned at will as magical foci. Additional minor artifacts include: